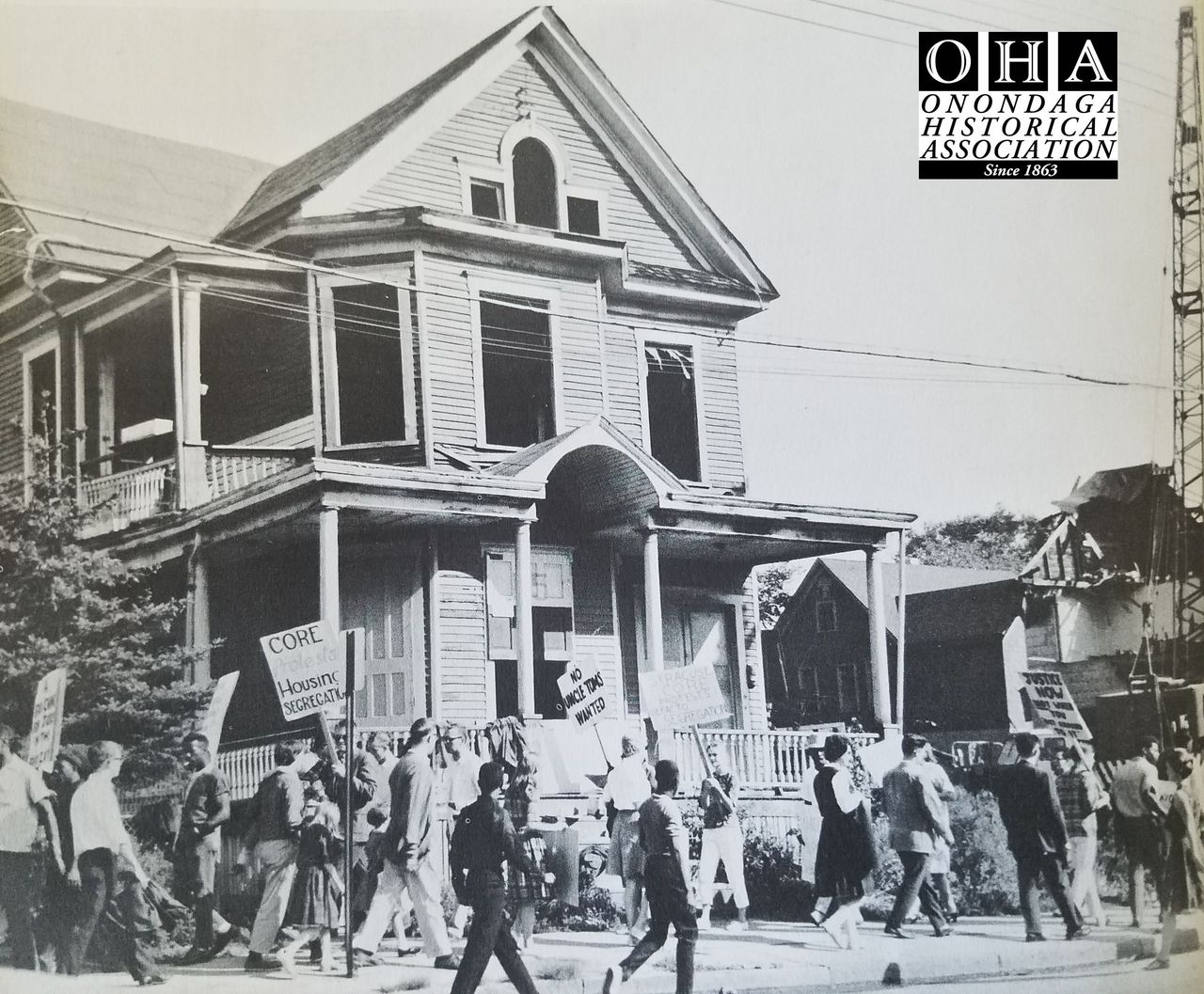 On the morning of August 9, 1973, Dr. George Wiley, National Coordinator of the Economic Justice Movement and nationally known civil rights activist, and his two young children Daniel and Maya, took a boat out into the Chesapeake Bay.

Minutes into the trip, Wiley was thrown overboard. His body was found two days later.

This tragedy cut short the life of a brilliant man who had achieved national notoriety as the leader of the Congress for Racial Equality (CORE), fighting against racial discrimination in Syracuse during the tumult of the 1960s, at a time when the country’s attention was focusing primarily on the fight against Jim Crow in the southern states, Dr. Wiley and his compatriots here in Syracuse, shed light on the plight of black people in northern cities, where segregation and discrimination were as real as in Birmingham.

In 1960, Wiley came to Syracuse University to take up an assistant professorship in the chemistry department. He was only the third black faculty member at the university, following in the footsteps of Dr. James Birnie and Dr. Charles V. Willie, who was the first tenured black professor in the history of the university and a friend staff close to Dr. Martin Luther King.

Wiley’s arrival in Syracuse coincided with a series of “urban renewal” projects in the city, spurred in part by millions of dollars in federal funding related to the Pennsylvania-Canada Freeway (Interstate 81) project, which was to split the city in two.

In doing so, the Near East Side Urban Renewal Project and freeway construction necessitated the near total destruction of the city’s Fifteenth Ward. The controversies surrounding these projects were the catalyst for years of concerted and effective protests that brought the people of Syracuse directly into the greatest civil rights revolution.

After the Greensboro Four and the sit-in movement they inspired, and the success of the Freedom Rides in 1961, CORE chapters sprang up across the country.

From these humble beginnings, Wiley and his colleagues have built a robust and moderately effective movement for social justice on campus and in the city.

Under his leadership, the Syracuse chapter is addressing the issue of segregation in housing and schools in the city, two issues exacerbated by urban renewal plans. In March 1962, Wiley hosted CORE National Director James Farmer in Syracuse for a screening of “Freedom Ride,” a documentary chronicling the events of the past summer.

Wiley and Farmer formed a friendship that lasted the rest of Wiley’s life, and his visit was an important recognition of Syracuse’s place in this national struggle. Farmer told reporters he expected the Syracuse chapter to be “one of the largest” in the country given the city’s harsh segregation patterns.

Wiley added that the “time has come” to rid Syracuse of its “ghettoism.”

In Syracuse, the “ghetto” was synonymous with the city’s 15th district, which before the construction of the freeway bordered the campus on its eastern edge.

More than 80 percent of the city’s black population, which grew by 144 percent between 1950 and 1960, lived in this neighborhood plagued by absentee landlords, substandard homes, and low-cost housing.

Residential segregation, the result of decades of practices such as covenants and redlining, has caused school segregation by default. Wiley and CORE have made these interconnected issues their main targets.

Additionally, in April 1963, CORE established the Committee on Equality at Syracuse University to “continue to publicize areas where the civil rights of individuals are violated”.

This spring and summer marked a turning point for the movement, both nationally and locally, as Eugene “Bull” O’Connor’s attack dogs of Birmingham maimed protesters and children while the nation watched their televisions (many of which were made, coincidentally, at G. E’s Electronics Park), Wiley, Bruce Thomas, and Evertt Makinen met with Syracuse Mayor Walsh, presenting him with a nine-point plan titled “Let’s Desegregate Syracuse.”

In cooperation with the NACCP, CORE also picketed the Syracuse Hotel, the city’s largest hotel and site of many college functions, demanding that the hotel hire black waiters and bellboys. The hotel capitulated in August. Later that month, the Syracuse CORE Chapter sent nearly 300 representatives to the March on Washington for Jobs and Freedom, where Dr. King delivered his famous “I Have a Dream Speech.”

These events galvanized CORE and its community partners in Syracuse. At the same time, bulldozers flattened dozens of properties in the 15th Ward, including CORE’s headquarters at 608 East Adams Street. Demolitions were underway and while there was no real prospect of stopping them, CORE and their allies recognized the huge opportunity this presented to them to bring this critical conversation to the fore.

Wiley met with Mayor Walsh and members of his administration on September 4. These discussions came to nothing.

On September 13, about two hundred protesters, including teachers and students, showed up at a construction site in the 400 block of Harrison Street and chained themselves to equipment and climbed onto the roofs of houses that were supposed to be demolished.

Fourteen protesters were arrested that night, including eight SU students. Initially, Chancellor Tolley issued a statement suspending any student arrested during the protest, but he eventually retracted it.

Wiley himself was arrested, along with nine other SU students, on September 16. The next morning, nearly 300 people gathered in support of protesters on the steps of Hendrick Chapel. Before the protests ended on September 27, 98 people were arrested. In November, charges were dropped for 97 of the 98.

Wiley continued to act as the face and thought leader of the CORE chapter he founded until 1964. A series of successful boycotts of Syracuse department stores against discriminatory hiring practices followed.

He spent much of 1964 compiling data for a CORE publication, “Project 101: Toward Social Justice”.

This impressive study detailed the ‘hopelessly linked’ problems of discrimination in housing and employment, as well as school desegregation and welfare procedures.

The study offered 106 specific propositions needed to “break the cycle of the treadmill in which the Syracuse Negro is caught”, so that he can actually “achieve freedom and full citizenship”.

In January 1965, Wiley took a year’s leave (he never returned) to become CORE’s Associate National Manager, working directly under James Farmer. A year later, Wiley resigned from his post when Floyd McKissick was elected to lead the organization, unhappy with his lack of progress. He founded the Poverty Rights Action Center in May 1966, which became the National Welfare Rights Organization.

He became a strong advocate for welfare reform and was an early supporter of a federally funded guaranteed income, an idea known today as Universal Basic Income (UBI). At its peak in the late 1960s, the NWRO had 800 chapters, including one in Syracuse, and more than 125,000 members.

His tragic death at a young age, like so many of his contemporaries in the movement, left so many guesses. That said, Wiley’s life and work, which he began on the campus of Syracuse University, is a testament to the power of ideas and action, and an inspiration to those seeking a fairer world.

When should you use your home COVID tests