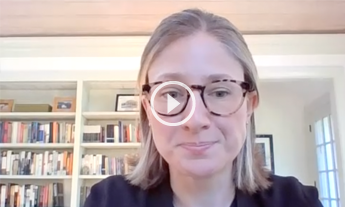 Patients with EGFR-mutant non-small cell lung cancer in the CHRYSALIS-2 study were treated with the combination of amivantamab-vmjw (Rybrevant), lazertinib (Leclaza), carboplatin and pemetrexed. Encouraging responses were observed with treatment. The objective response rate was 50% (95% CI, 27% to 73%) with a clinical benefit rate (CBR) of 80% (95% CI, 56% to 94%) in the general population.

According to Marmarelis, 15 out of 20 patients were still on treatment with an additional 7 months follow-up. Of the patients continuing treatment, 10 had previously achieved a partial response.

0:08 | The primary efficacy endpoint was discussed, and the safety signals were as previously reported for amivantamab, lazeritinib, and chemotherapy alone. There was a slightly higher numerical rate of observed cytopenias, particularly first-cycle neutropenia. And this is difficult to interpret based on the heterogeneous group of patients who had also received prior chemotherapy. Also, the fact that it was checked between cycles, which is not standard clinical practice, may have increased these numbers slightly. But in general, there were no new safety signals for this combination.

0:47 | In terms of efficacy, we saw an overall response rate of 50% and a clinical benefit rate of 80%. And this was observed whether or not the patients had baseline brain metastases. The other important finding is that with a median follow-up of seven months, we found that 15 of 20 patients were still on treatment, and 10 of 10 patients who had a partial response were still on treatment at the time of data deletion. off, suggesting that we are seeing lasting responses with this combination.

David Adkins went to Dartmouth to become a doctor or a lawyer. But then an acting internship in the Berkshires changed her life | Company