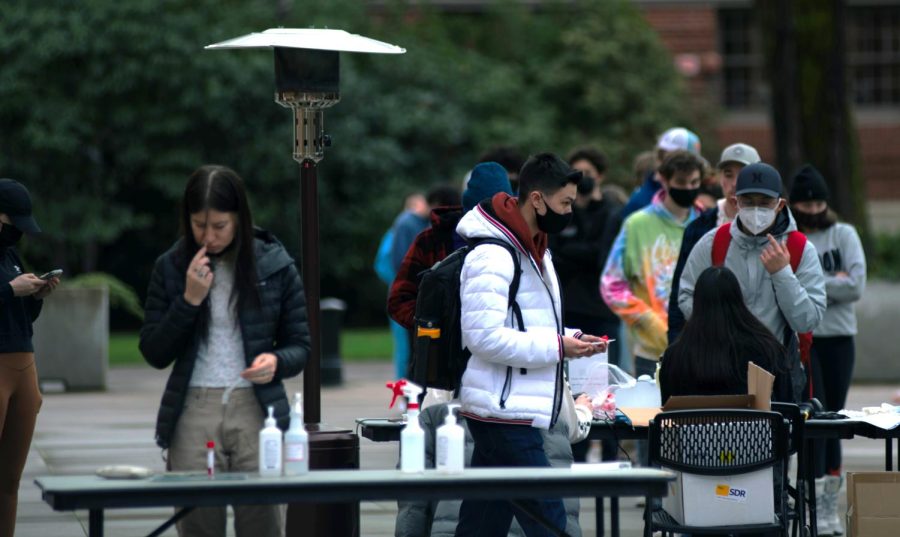 Floran Kacaku, a math professor at Oregon State University, was suspended for failing to follow the university’s COVID-19 vaccination policies at the start of finals week during the winter term.

On March 25, Kacaku was reportedly fired, although the reason for his dismissal is not disclosed.

Kacaku’s initial suspension came after OSU updated its policy on lifting masking warrants on March 12, and after Oregon Health and Science University predicted that the state of Oregon had already peaked for COVID-19 cases.

OSU policy regarding COVID-19 vaccinations requires students and staff to be vaccinated or have proof of negative COVID-19 tests weekly to attend or teach classes.

According to Kacaku, he tested positive for COVID-19 and was ordered to stay home while a substitute teacher came in to teach his lessons. Kacaku said he believed the email was fake due to what he claimed was unreliability of emails from OSU management, as well as recent fraudulent emails, c that’s why he ignored the email.

“There is a teacher who emails me from an outside source,” Kacaku said. “[He] either send it, like my Gmail account, not my Oregon State email. When he sends me through Oregon State, it’s an external email, so I’m not sure how the department works there.

According to Kacaku, while he received emails regarding his non-compliance with vaccines, he did not receive any phone calls or other communication about the situation until his suspension.

According to Parker Williams, one of Kacaku’s students, Kacaku went to the class he was instructed not to teach on March 9, where an argument ensued between Kacaku, the substitute teacher, and Enrique A. Thomann, the head of the mathematics department.

According to Kacaku, he felt that Thomann expected him to be subordinate to him or intimidated by his power.

“So he’s filming and he expects me to do something physically intimidating,” Kacaku said. “So I can look like the bad guy.”

Cameron Fletcher, another Kacaku student who was in the class at the time, said that other than taking the phone out of Thomann’s hands, Kacaku did nothing physical to Thomann.

“Floran was raising his voice at him and pointing the finger at the man,” Fletcher said. “There was no other aggressive action other than that.”

“Instead of letting go of my grievances, talking about what happened to me, it wasn’t about that,” Kacaku said. “It was an interrogation and I felt like I was in a police station. It was I who complained. And now I am being judged.

Kacaku, who said he already contracted COVID-19 two years ago, also questioned why the university was asking about his vaccines, as he said COVID-19 was over and masks weren’t. were no longer needed.

“Obviously if I got COVID-19 I already had immunity, and I’m fine and healthy, I never got COVID-19 after that,” said Kacaku. “Why weren’t we talking about COVID-19 when [the university] hired me for the first time? Why weren’t they [they] so persistent about it [at the beginning]?”

Kacaku said he was told to attend a meeting for his noncompliance. According to Kacaku, he was told he was allowed to bring in a union representative for his defense, but was not allowed to tape the meeting.

Kacaku said he was unable to find a union representative and received no assistance from OSU in finding one.

According to Steve Clark, vice president of academic relations and marketing, employees receive considerable help from their immediate supervisors as well as from the leaders of the units in which they work, such as deans.

“In addition, employees receive support from the university’s human resources office and other offices,” Clark said. “For example, the office of the ombudsman, or many other offices depending on the issue, are at the service of employees.”

Kacaku said he believes he should not have been suspended due to the administration’s inconsistent enforcement of the university’s COVID-19 policies.

According to Kacaku, the former department head was lenient with COVID-19 policies. It wasn’t until Thomann became the department’s permanent head, Kacaku said, that these COVID-19 compliance issues came to light.

“I can understand why he was angry about being filmed and especially given how close we were to lifting the mask mandate etc.,” Williams said.

According to Williams, however, he disagrees with Kacaku’s decision to avoid vaccination or Kacaku’s choice to attend classes after testing positive for COVID-19.

Accreditation changes could cause headaches in the state of Florida

Cincinnati is behind on recalls, vaccines; who should get the second shot?