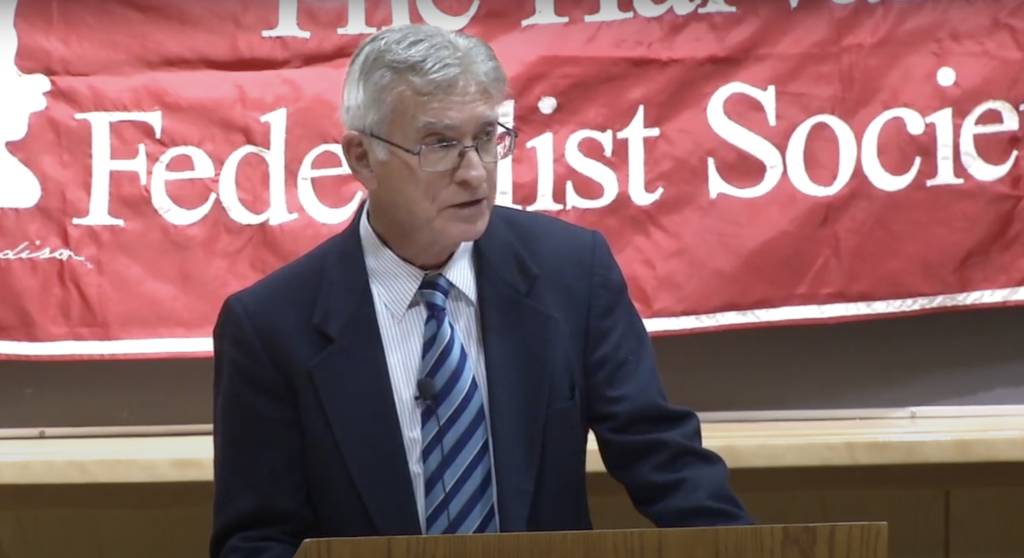 Lawrence Alexander is a professor in the Faculty of Law at the University of San Diego. He is known to have co-authored an infamous article in The Philadelphia Investigator with Amy Wax, Professor of Law at the University of Pennsylvania arguing that the decline of “bourgeois values” in the United States was associated with various negative social developments. They wrote:

This culture defined the scenario we were all meant to follow: get married before having children and strive to stay married for their sake. Get the education you need for a paid job, work hard, and avoid idleness. Go the extra mile for your employer or client. Be a patriot, ready to serve the country. Show good neighborliness, good citizenship and charity. Avoid bad language in public. Be respectful of authority. Avoid drug addiction and crime.

These fundamental cultural precepts prevailed from the late 1940s to the mid-1960s. They could be followed by people of all walks of life and abilities, especially when backed by near universal approval. Membership was a major contributor to productivity, educational gains and social coherence during this period.

This essay proven to be deeply controversial, and was followed by several other controversies involving Wax. She was recently accused of racism after saying Asian immigration should be curtailed, in large part because most Asian immigrants vote Democrats. His university has already taken action to prevent him from teaching his class, which is a blow to the fundamental principles of academic freedom, no matter how wrong those opinions may be.

Today, Alexander faces an even more obvious violation of the fundamental principles of academic freedom; it was recently requested by the Emory Law Journalâ€”A publication from Emory University Law School â€” to contribute to a “festschrift” on the work of Michael Perry, professor of law at Emory. A festschrift is a collection of writings intended to honor a particular scholar, even though they criticize elements of that scholar’s thought.

Alexander’s contribution was indeed critical of Perry’s work on disparate racial impact and equal protection. “I’m focusing on it, not finding a bone to pick up somewhere in Michael’s
impressive work, but because its error in these early works has an analog in political discourse today, which makes this error of many years past of contemporary significance, â€Alexander wrote.

He writes from a conservative perspective and undoubtedly considers that the presumably liberal editors of the Emory Law Journal not to agree with. But they didn’t just record this disagreement and proceed with the publication: they told Alexander that the essay was racist and should be significantly revised.

â€œWe disagree with your conversation about systemic racism, finding your words offensive and needlessly divisive,â€ wrote Danielle Kerker Goldstein, editor. â€œAdditionally, there are various cases of using insensitive language throughout the essay (for example, the widespread use of the objectifying term ‘blacks’ and ‘blacks’ (pages 2, 3, 6, 8, etc); the discussions of crime and heredity (pages 11 and 14), the unrequited statement that luckily racism is not a problem today (page 18)). the question and purpose behind the publication opportunity offered. “

Kerker Goldstein did not respond to a request for comment.

Readers can take a look at the essay and judge for themselves. Speaking only for myself, I find it hard to accept that the language is insensitive and objectifying. Alexander does indeed refer to “blacks” and “blacks”, but he also refers to “whites” and “whites”. He cites criminality and heredity simply to rule out the case altogether. And his views on whether racism is a big deal today are certainly relevant to his rejection of Perry’s philosophy.

Alexander refused to modify the piece. â€œI wrote about how I see the racial situation in America today,â€ he said Raison. “The editors found my opinions ‘offensive’ and refused to publish them, despite being asked to write for a festschrift issue in their journal.”

Two other contributors withdrew their submissions to protest the newspaper’s treatment of Alexander. The purpose of the festschrift is to include a range of perspectives on Perry; singling out Alexander undermines the validity of the project.

“This opera is not finished,” wrote Gail Heriot, professor of law at the University of San Diego School of Law and a collaborator of the Volokh Conspiracy, which is hosted on this site. “Two law professors (a conservative and a liberal) withdrew their essays from the ELJ to protest his treatment of Larry. Two other professors, who I think are both on the left, said they would only post if they could include blurb in front of their essays to protest Larry’s decision not to post. They don’t necessarily agree with everything in Larry’s essay. But defending it doesn’t require an agreement. “

Clinical assistant, employment in equine medicine at the UNIVERSITY OF PRETORIA