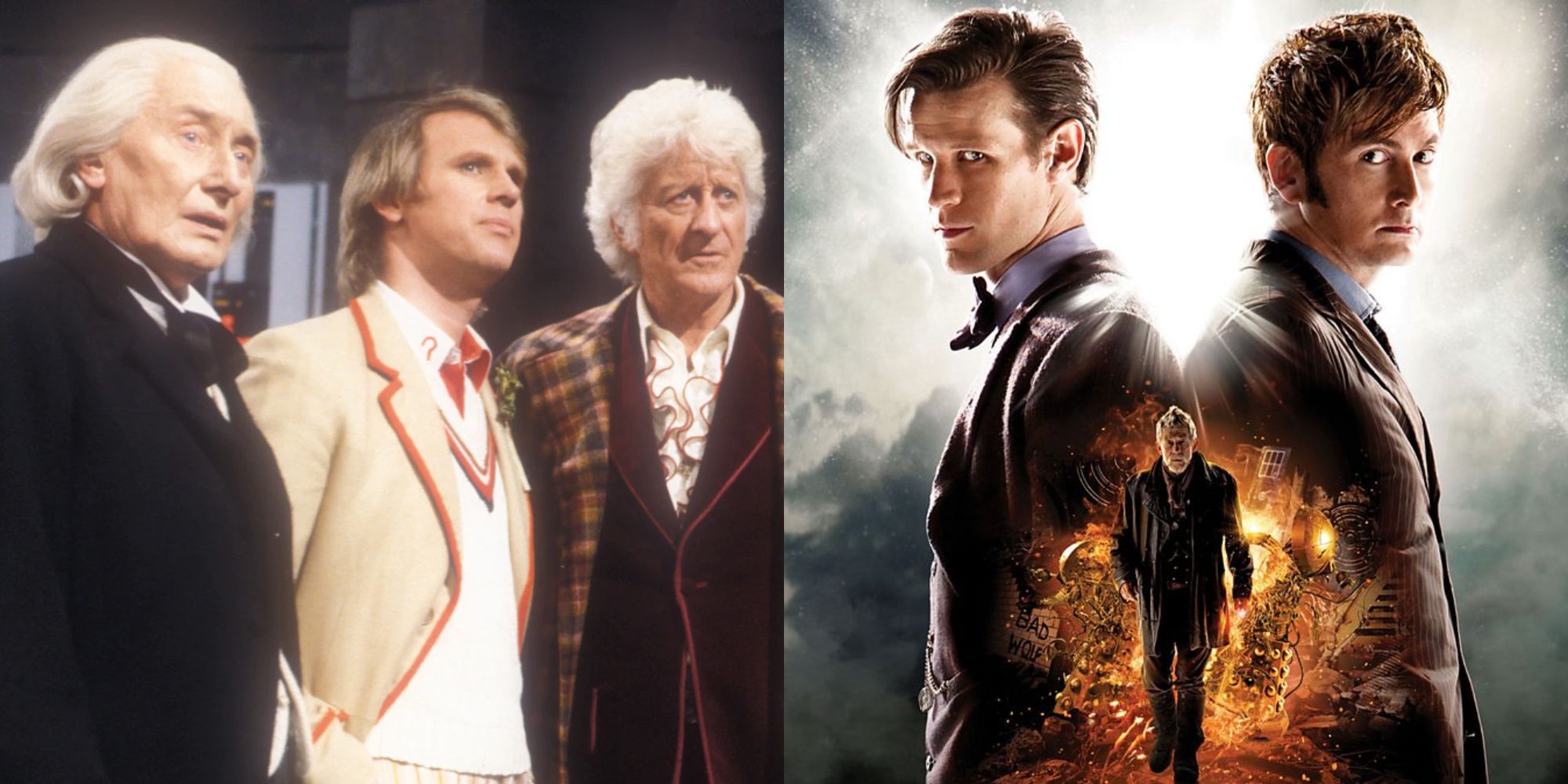 Doctor Who: Ranking Every Episode Multi-Doctor

with the next Doctor Who 60th Anniversary Special comes another multi-doctor adventure. It is not yet known how many old Doctor Who the cast will show up for the special, but it’s safe to assume fans will have some fun interactions between Ncuti Gatwa’s Fourteenth Doctor and David Tennant’s Tenth Doctor. After all, having only one incarnation of the Doctor appear in an anniversary special would be sacrilege.

Even outside the realm of birthday specials, Doctor Who indulged in multi-doctor stories. Not all of them have been great, but every time such adventures are announced, Whovians go crazy to see how different versions of the character will bounce off each other.

Produced for the UK charity Children in Need in 1993, “Dimensions in Time” sees the Rani accessing the Doctor’s timeline and attempting to capture him in a time loop. With the help of all his previous companions and UNIT, the Doctor works alongside the third through seventh incarnations to stop the Rani.

“Dimensions in Time” is often derided as one of the worst tracks on Doctor Who medium ever created. While it’s fun to see most incarnations of the Doctor in one story, they’re barely onscreen together. Worse still, the special is an absurd piece of plush that throws the EastEnders thrown into the plot for some reason and serves as a representation of the classic Doctor Who the worst tropes.

Peter Capaldi’s final adventure as the Twelfth Doctor, “Twice Upon a Time”, couples with the very first incarnation of the Doctor as they both express concerns about regeneration. Along the way, they pick up a British Army captain who is apparently destined to die in World War I.

While the idea of ​​pairing the Twelfth Doctor with a younger version of himself and using the Christmas setting as a way to get him out of his depressed state is thematically inspired, the execution leaves a lot to be desired. Too much time is spent on Twelve’s feuds with Bill, and the portrayal of the First Doctor as a sexist curmudgeon borders on character assassination. It’s no wonder people find the Twelfth and First Doctors to be the least sympathetic incarnations of the Doctor.

Set immediately after Martha leaves, “Time Crash” finds the Tenth Doctor crashing his TARDIS into the Fifth Doctor. Excited to stumble upon his previous incarnation, he mocks the Fifth Doctor’s eccentricities and bland attire before the two work together to correct the timestream.

Although “Time Crash” doesn’t offer much to die-hard fans Doctor Who fans, his pairing of the fifth and tenth incarnations of the Doctor is an inspired choice. The two bounce off each other quite well, and the lighthearted tone helps sell the reverence Ten has for his previous incarnation (and by extension, works to publicize the Fifth Doctor to new viewers).

“The Two Doctors” follows the Sixth Doctor as he tries to save his younger self from Dastari and the Sontarans. To do this, he must find out why his previous incarnation was visiting Space Station Camera.

Despite the bloated nature of the script, the questionable continuity and the shocking amount of violence, “The Two Doctors” is still a lot of fun thanks to Patrick Troughton’s dynamic Second Doctor performance. Although he’s sidelined for much of the story, every moment he’s onscreen is a gem, and his interactions with Colin Baker’s Sixth Doctor show just how much this latest incarnation is. criminally underestimated.

Beginning as a simple alien adventure, “Fugitive of the Judoon” pits the Thirteenth Doctor against the goofy, rhinoceros-like space police as they pursue the episode’s titular fugitive. Along the way, Thirteen encounters an incarnation of herself she has no memory of.

While the inclusion of a mysterious incarnation of the Doctor completely negates the episode’s basic premise, “Fugitive of the Judoon” makes up for it due to the contrast between Jodie Whitaker and Jo Martin’s portrayals of the Doctor. Whitaker’s bubbly incarnation of the renegade Time Lord is tested by the looser morals of the Fugitive Doctor, providing audiences with one of the best Doctor Who episodes written by Chris Chibnall.

The first Multiple Doctors story, “The Three Doctors”, finds the Time Lords under attack by the villain, the anti-matter being Omega. With their cosmic energy sucked into a black hole, they use what little power they still have to bring the Third Doctor into contact with his first and second incarnations.

Although “The Three Doctors” isn’t particularly special, especially as a Doctor Who season premiere, it’s an important episode because of how carefully it balances story needs with fan service. The episode sets the precedent for how the different incarnations of the Doctor will interact with each other, and especially emphasizes that these crossover episodes can only happen in the most dire of situations.

“The Five Doctors” follows the first five incarnations of the Doctor as they are individually removed from time and placed in a Gallifreyan area known as the Death Zone. Together they must fight their way through Rassilon’s game to uncover the mystery of their capture and escape.

Related: 10 Best Stories To Introduce People To The Classic Doctor Who

While “The Five Doctors” fails to properly deliver on the premise of the five incarnations of the Doctor coming together for an adventure, it’s still a wonderful adventure that functions as a celebration of the show’s history. The stakes are high, each incarnation is paired with an iconic companion, and there’s never a dull moment to be had during the 90 minute runtime.

An out-of-canon adventure starring the actors who played the fifth, sixth, and seventh incarnations of the Doctor, “The Five(ish) Doctors Reboot” focuses on the former stars’ attempts to appear in Doctor Who 50th anniversary. Along the way, they meet several members of the Doctor Who the production team and annoy their colleagues.

Although he is not a good Doctor Who adventure, “The Five(ish) Doctors Reboot” does what few other multi-doctor stories accomplish by having fun with its premise. There’s a clear chemistry between the three actors who played the Doctor in the 1980s, and the fan service seems fitting given the comedic nature of the piece.

Set during the last day of the Time War, “The Day of the Doctor” finds the War Doctor transported to 1562 England to see what impact the destruction of Gallifrey will have on his future incarnations. He realizes, through his encounter with them, that destruction is not the only course of action to end the Time War.

Although “The Day of the Doctor” largely serves as a celebration of the modern iteration of Doctor Who rather than the whole story of the series, the episode is stellar in its examination of who the Doctor is as a character. Pairing the guilt-ridden tenth and eleventh incarnations of the Doctor with the cantankerous war medic, the special bridges the gap between the sensibilities of old and new. Doctor Whoand reinforces that the character’s modus operandi is to inspire hope.

Next: Quote from a doctor that sums up the personality of each incarnation