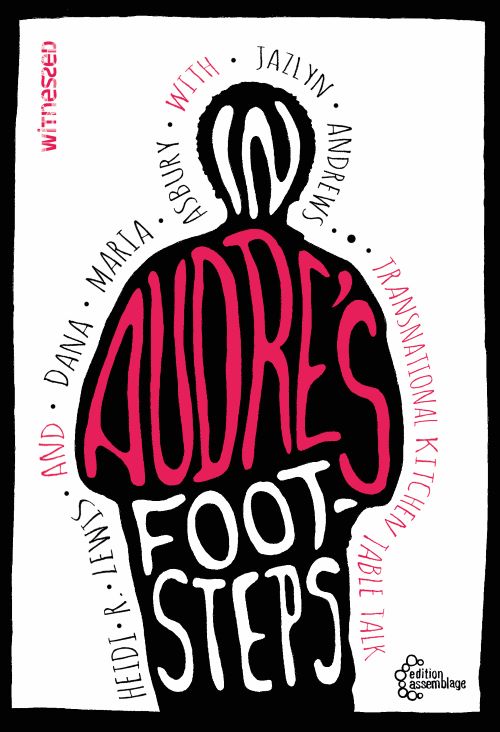 Congratulations to Professor Heidi R. Lewis for the publication “In the footsteps of Audre”

In the footsteps of Audre, co-authored by Dana Maria Asbury with Jazlyn Tate Andrews (Feminist & Gender Studies ’17), pays homage to black intellectual traditions set forth by Dr. WEB Du Bois, the Reverend Dr. Martin Luther King, Jr., Dr. Angela Y. Davis and Audre Lorde, all influenced by their experiences in Berlin. Engage black and transnational feminist cadres, In the footsteps of Audre amplifies the resistive and generative experiences of black intellectuals and women of color in Berlin and the United States, examining how they resist oppressive narratives and approach the always advantageous but sometimes controversial contours of solidarity.

In addition, In the footsteps of Audre uniquely features 7 chapters transcribed from real conversations; presents a “Foreword” co-written by Jasmin Eding and Judy Gummich, co-founders of ADEFRA: Schwarze Frauen in Deutschland, the first grassroots activist organization for black German women; Ria Cheatom, a dear friend of Audre Lorde, member of ADEFRA, and co-author of Audre Lorde: The Berlin Years, 1984 to 1992 with Ika Hügel-Marshall and Dagmar Schultz; and Hügel-Marshall, also a dear friend of Audre, member of ADEFRA, and author of Invisible Woman: Growing Up Black in Germany, the first single-authored book by a black person in Germany; features a chapter focused on current leaders of the Adefra Generation, Katja Kinder (also co-founder), Peggy Piesche and Prof. Dr. Maisha Auma; and presents a love letter to Katharina Oguntoye, founding member of ADEFRA and dear friend of Audre, in “Afterword”.