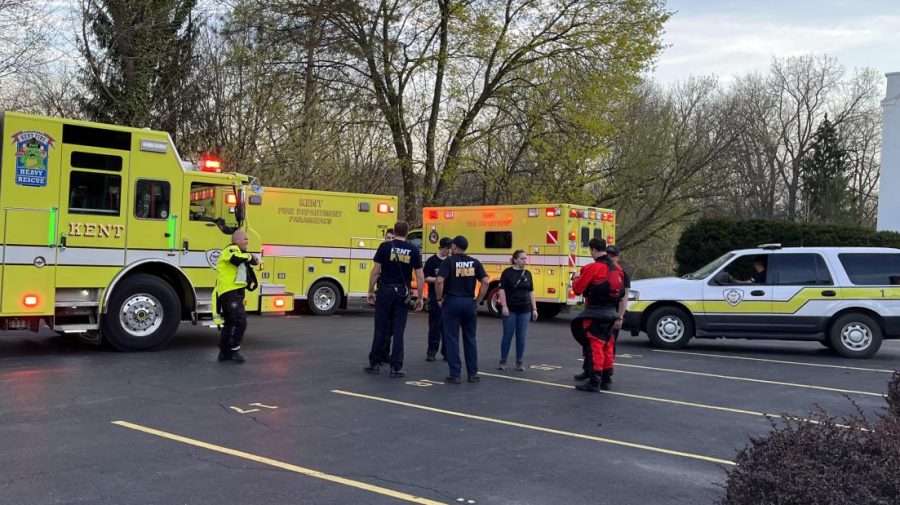 Darren Bade talks to members of the Kent Fire Department after taking part in a rescue mission on Saturday, April 23, 2022. Bade, an associate professor at Kent State, was kayaking on Saturday when locals called him alerted to a mother and daughter drowning further down the river. Bade helped the couple find land and waited with them until firefighters arrived.

Darren Bade had planned to spend his Saturday night kayaking in the Cuyahoga River. When the Kent State biology professor approached the stretch of river south of the West Main Street Bridge in Kent, his kayak trip turned into a rescue mission.

“I was kayaking here and coming up the river when someone was shouting that there was [were] a few people in the river.

Onlookers in the Over Easy on The Depot restaurant parking lot and along the West Main Street Bridge could see what firefighters said was a mother and daughter struggling in the water. They shouted to Baden to help them.

He got back in his kayak and paddled north – when he saw the pair he got out of his kayak.

“I quickly picked up [the water] …and helped them out of the water and onto the island until firefighters could pick them up from there.

The girl “didn’t look very well,” Bade said. “By the time I reach it, I [didn’t] whether she was breathing or not.

The water temperature of the river was between 57.6 degrees and 59.7 degrees depending on the United States Geological Survey. In water whose temperature varies between 50 and 60 degrees, symptoms of hypothermia can set in in less than an hour, depending on the useakayak.org. Loss of dexterity can occur within 15 minutes, exhaustion can set in within two hours, and expected survival time is between one and six hours.

“The child seemed barely conscious,” Kent Fire Captain David Moore said. “So that kind of… accelerated our efforts to get out as quickly as possible.”

“We immediately sent two rescue swimmers to stabilize the situation, then we got a boat across to bring mom and child back,” Moore said. It was still unclear Saturday night where and how the mother and child entered the river.

Both were rescued from the water at 7:31 p.m. and taken to Akron Children’s Hospital.

“The kid was out way before that, so I would say within 25 minutes we had them out of the water,” Moore said. “When the kid left and mum left, they were both alert and aware, so that’s good news.”

Zaria Johnson is editor-in-chief. Contact her at [email protected]

A woman realizes her strength after an accident; family, recovering dog