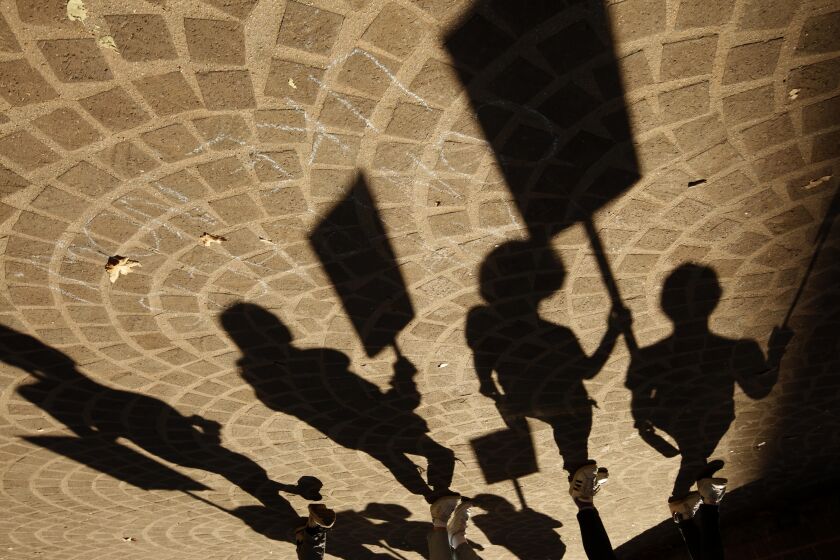 As a professor at UC, I support the strikers. Our schools shouldn’t have let it come to this

It’s no mystery why 98% of United Auto Workers members who voted on the strike supported it. The Average UC System Graduate Student Earns $24,000 annually — nearly $15 000 less than the average apartment in Santa Cruz costs a year. This is obviously an impossible salary to live on.

As a former teaching assistant and current professor, I know better than anyone the value of positions for these workers in a university system. In my experience, most college professors are assigned one teaching assistant, some more than one, depending on the size of the class and the position of the professor. With some variations, most teaching assistants are responsible for all interactions with students outside of class. In other words, if a student has a question, they meet in person or email the TA, not the professor.

But the real workload is filing. Professors typically have their teaching assistants do it all, which means reading hundreds of pages of student work a week, commenting on said work, and then entering grades according to the categorization method used by the professor in question. This is an overwhelming amount of work, all on top of the already strenuous responsibilities of grad school.

I felt lucky when I was “awarded” to a TA position in graduate school – my program used the term “awarded” as if it was not a paid job but a a prize awarded only to a select few who had achieved such a prodigious position. I’ve worked with one of the best writers of the past two decades, and I haven’t been saddled with the heavy responsibility of grading student assignments. But my experience is a rare exception to the standard TA pattern that feels more like indentured servitude than reasonable post-college employment.

An assistant on my campus said to me, “I have to strike…we can’t do anything else. They will not negotiate with us. They don’t even want to talk to us… We need more money. I can’t even pay the rent. I have a scholarship and still have to take out student loans just to get by. But we can’t do that anymore. I heard that sentiment — “we can’t take it anymore” — repeated by everyone I spoke to about the strike.

The workers demand a base salary of $54,000, more than double their current average salary. UC officials offered some workers a 7% raise in the first year and 3% each year thereafter. While officials say they can’t meet financially all the demands of the workers, the investment advantages of the UC system was $152.3 billion at the end of the 2021-22 academic year, according to the UC president’s office. Some UC administrators receive half a million dollars wages. It’s not so much a question of whether the system needs more money, but of distributing it fairly.

UC is not content to just let down its student employees. It is to drop the whole system, including the provosts, the professors and the most important element: the student body.

I support the strike because I support my students. I am still figuring out what this means right now for me as a teacher. I have two basic choices to continue the courses: continue to teach them in person or switch to online teaching. The former means crossing a physical picket line, while the latter looks like an empty gesture of solidarity that doesn’t help disrupt the system to support the strike.

For now, I give my lessons in person. I believe this is the only way to honor my primary responsibility to provide my students with the best possible education. But I’m also worried that if it means I downplay the effectiveness of the strike, I’m not helping my students in the long run. Ultimately, the better these employees are taken care of, the better they will fulfill their vital role in the education of our undergraduate students, which should be the priority of any public institution of higher learning.

When interviewing one of my classes, I discovered that all but one of the 26 students supported the strike (and only half were content to move classes online, which makes sense; this generation of undergraduates had already seen his secondary education drastically interrupted by the COVID pandemic).

Students and staff deserve more from their university system. As negotiations continue, UC has put its faculty in the difficult position of compromising on education and working around the university’s shortcomings.

But that’s nothing new for the seasoned educator. After all, part of our job has always been to bridge the gap between societal fairness and bureaucratic greed.

Joseph Holsworth teaches literary theory and criticism at UC Santa Cruz and is a veteran of the wars in Afghanistan and Iraq.