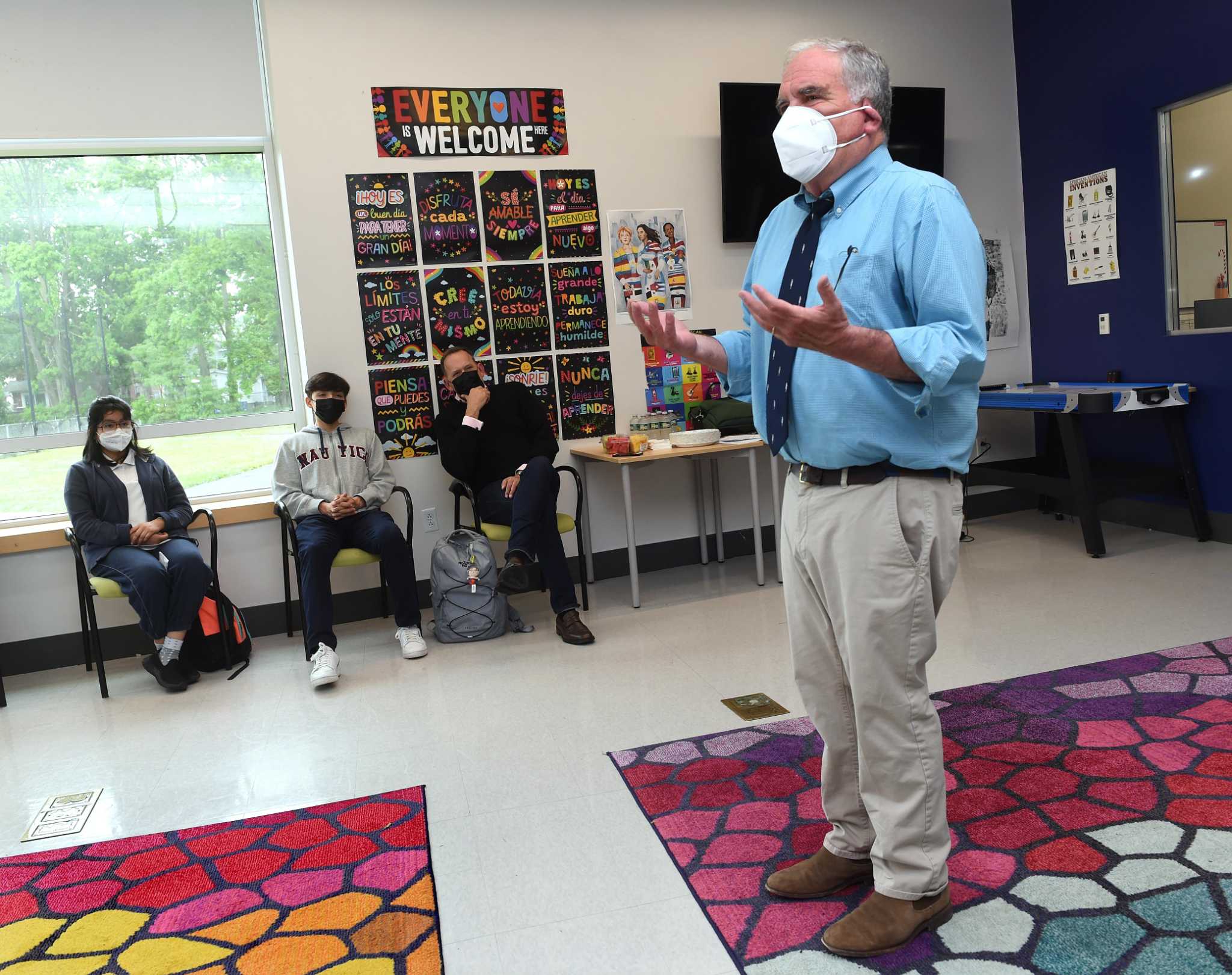 Amistad students from New Haven meet their teacher from Princeton

NEW HAVEN — This year, 12 juniors and seniors at Realization First Amistad High School took a college-level course on war, taught by a professor at Princeton University.

They caught it on Zoom, but on Friday Professor Miguel Centeno visited his class in person, with other students to talk about the course, how to get into college (don’t look at the price, learn how to get noticed ) and meet face to face.

“All I know is you have a little black box around you,” Centeno said, referring to virtual meetings. So he made everyone stand up and congratulated them. “It’s a tough class at Princeton; this is called a difficult class. And you did. You were just awesome.

“The Western Way of War” wasn’t just a high school class. It’s a course that Centeno, a professor of sociology and executive assistant dean of the School of Public and International Affairs, teaches Princeton students. He taught it at Amistad and eight other high schools across the country, sponsored by the National Laboratory for Equity in Educationa non-profit association that brings together high schools, colleges and other non-profit associations.

Christopher Beauchamp, an Advanced Placement World History professor who co-taught the course with Centeno, said, “Over 84% of our incredible Amistad Scholars have earned actual college credit from Princeton. And several of them were… the top performers nationally.

Angelic Nunez, 17, of Bridgeport, thanked Centeno. “You have taught us that war is not just about violence. It’s more sociological for a bunch of reasons,” she said. “And it was really interesting to see how people think about war and how you study it yourself.” She said she wanted to study the field more and urged tenth graders to take the course. “It’s writing intensive, but it’s okay,” she said.

Abiba Biao, 17, from New Haven, admitted she was not fully motivated to attend the classes. “I wasn’t able to fully immerse myself in the work, but I really enjoyed the writing assignments and I also liked the textbook,” she said.

“Learning how there are so many confounding factors in war and how it’s not just psychological, it’s also honor,” she added. “Also, we’re just a very patriarchal society, so of course we appreciate war and how it could be used for colonization and those other factors, which I found very interesting to find out.”

Centeno told someone who said she was only half-interested, “You did a pretty good course definition. I congratulate you halfway. One hundred percent you have to be amazing.

He said the teaching in the class “more than met my expectations. … Teaching you and the other 150 students has been the best professional thing that has happened to me in four or five years. … You blew my mind. Your essays have blown me away. Many of you have written essays that would be acceptable at Princeton.

Centeno said Russia’s invasion of Ukraine was an illustration of what he teaches in his course. “I’ve never seen a better indication of how important it is, what a society is,” he said. “If you look at the behavior of both armies, it’s almost a reflection of some of the qualities of their society. One is very corrupt. You cannot get information. Putin had no idea his army was worthless, because even Putin didn’t know that.

In Ukraine, there is patriotism, he says. “It’s not that they like Ukraine so much, it’s just that they don’t want to be Russian,” he said.

Amistad Principal Simon Obas said the course “was an amazing and unique experience. I think one of the greatest gifts in life is exposure. And for my kids to have this opportunity to be exposed to take a college course, and not just any college – we’re talking about Princeton – in high school, such an opportunity for inner-city kids.

He said the fact that his students have outperformed other high schools “just speaks to the potential they have.”

Beauchamp said he normally teaches tenth graders, so he wished he could have had the students in the class for another two years. “But it was so great for the students to see them stretch, push themselves even further, do the hard work and get the rewards and recognition for it,” he said. “It’s wonderful, absolutely wonderful.” He also praised the coordination with Princeton and the Education Equity Lab.

Daisy Hernandez, 17, of New Haven, said the course “was a great opportunity. In fact, you have to learn to be organized and to learn new things, to stay on track, to learn. … Everyone had a really good time from what I saw. Everyone was happy to be there. And I was the most excited because it’s an opportunity that doesn’t come all the time. So I was very grateful for that. »

Joel Villafane, 16, from Bridgeport, said the class was “very difficult. I thought I knew what I was getting into. He said it took a lot of independent learning.

“It’s not like high school,” he said. “You have to take responsibility. You had to be above yourself. »

Next year, Amistad students will have another chance to take a college course, taught by Professor Angela Duckworth of the University of Pennsylvania, called “Psychology, Courage, Passion, and Perseverance.”

To eliminate bias, doctors are training to look beyond obesity – Sentinel and Enterprise