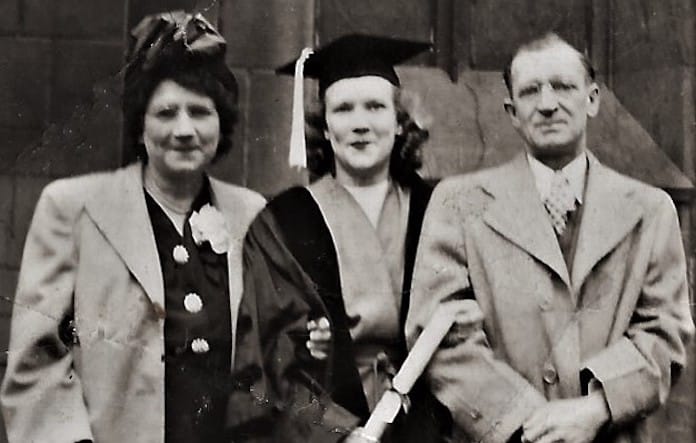 Orlou Reitz, OD, is among the new exhibits this season at the Monroe County History Museum in Waterloo.

Reitz was the first optometrist to practice in Waterloo. Coincidentally, the museum’s exhibit comes 75 years after it opened its office on North Market Street in 1947.

In 1965, she and her first husband, the late Glenn Raeber, built a house on East Mill Street. Around this time, Orlou moved his office to a wing of the residence until his retirement in 1987.

While the museum’s exhibit features memorabilia from Reitz’s optometry career — like his degree and an old pair of glasses — the exhibit doesn’t begin to scratch the surface of his fascinating life.

When asked if there were any specific patients she remembered, Reitz said there were just too many. The answer is not surprising given that she was the only optometrist to serve Waterloo and surrounding areas for the first 20 years of her practice.

In fact, his 40-year career as an ophthalmologist is perhaps the most mundane aspect of his story.

Orlou, who turns 96 in May, was born in Waterloo to Frederick and Leora Reitz, the third of 10 children.

Reitz graduated from Waterloo High School in 1944. She said her degree program in optometry was accelerated thanks to government incentives to increase the number of licensed medical professionals during World War II.

When she graduated from optometry school in April 1947, however, she had to wait for her license to be issued. During the interim, she taught physical education at Ss. Peter & Paul High School in Waterloo for several months before she could officially begin her practice.

Coincidentally, two of his brothers, Roger and Frederick W. Reitz, also chose optometry as a career.

All three are graduates of the Northern Illinois College of Optometry in Chicago. Roger graduated in 1942, Orlou in 1947 and Frederick in 1955.

His older brother’s decision to be an ophthalmologist was not the deciding factor in Orlou’s decision.

“I wanted to be an optometrist for a long time,” she said. “I just thought it would be a good job.”

Orlou is the only one to settle in Waterloo. Roger was an optometrist in St. Louis and Frederick opened a practice in Breese.

Ironically, the three Reitz children who grew up to improve the eyesight of others were the only ones who did not need corrective lenses themselves. Their seven other siblings would all end up with glasses.

Orlou has maintained the tradition of double-digit children. She and Glenn raised 11 together until Glenn passed away in 1977.

One of their children, Ann Raeber-Brant, earned her doctorate in optometry in 1994 and now practices in Phoenix, Arizona.

Ann wasn’t the only one in the Raeber family to gain experience helping people see better. Orlou remembers that several of his children sometimes worked together at the kitchen table to assemble eyeglass frames and lenses for his patients.

Towards the end of his practice at Waterloo, Orlou began aiming outside of Monroe County.

In 1985, shortly after marrying her second husband, Bob Burkemper, Orlou was contacted by Volunteer Optometrists in the Service of Humanity and made two trips to Guatemala – at her own expense – to perform eye exams. and equip the inhabitants with goggles.

She described the trips, lasting a week each in 1985 and 1986, as one-day exams during which she worked on a briefcase serving long lines of people who had traveled miles for an appointment.

She said that without a traditional office, she and about 10 other volunteer optometrists “tried to find the closest thing to a prescription” using different lenses they brought.

She and Burkemper wanted to continue giving back in 1987, this time joining the Peace Corps.

The couple signed up for a two-year mission, being posted to Malawi, Africa, in late 1987. Shortly after landing, Orlou began to have a medical problem which was determined to be related on the long plane flight.

The diagnosis led the couple to return to the United States, but they did not stay in Waterloo too long.

Orlou said her later retirement was sparked when Burkemper, an avid cyclist, told her he “didn’t get married to ride a bike on his own,” she laughed as she recalled.

The two then spent the next 20 years as hosts of campgrounds in national parks in several states, including Texas, Utah, Nevada, and North Dakota. The majority of their time as hosts was spent in Glacier National Park, Montana.

During that time, the two have clocked over 30,000 miles on their 10-speed mountain bikes.

Orlou, a devout Catholic, said sometimes when hosting the camp they had to travel 30 miles or more to attend mass at the nearest church – one of which was on a Native American reservation.

Even approaching 96, Orlou continues to regularly attend Mass at Ss. Peter and Paul Catholic Church in Waterloo. She still resides in Waterloo in the house that was once also her office.

“I’ve had a great life,” Orlou concluded, noting that she’s been to several different countries and visited every state in the US.

Now, more than three decades after her practice closed, Orlou is honored with a place in the local history museum, though the brief biography attached to the exhibit gives only a brief glimpse into a life which could fill several galleries.

The Monroe County History Museum, located at 724 Elaine Drive in Waterloo, is open weekends from 1-4 p.m. from early April through December or year-round by appointment.

To schedule a group visit, call 618-939-5008 or visit monroecountyhistorymuseum.org for more information on upcoming weekend programs.

Health and well-being 2022: back to the doctor