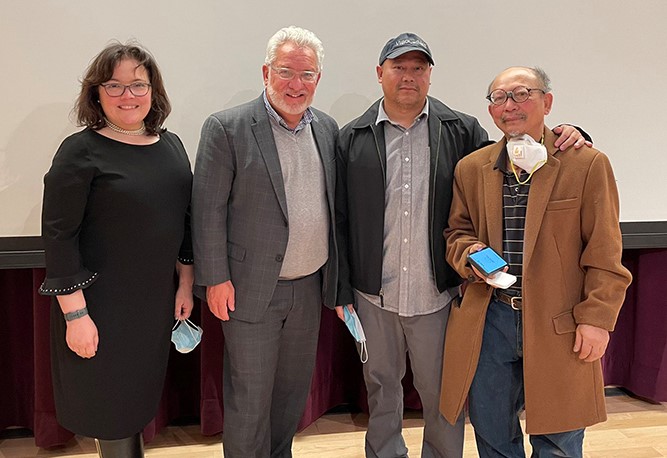 A documentary highlights the work of the master ceramist, professor at the MCC

The documentary tells the story of Yary Livan, one of only two Cambodian ceramic masters in the world and a National Endowment for the Arts National Heritage Fellow in 2015.

Livan is also Professor of Ceramics at Middlesex Community College.

Sungkriew was first introduced to Livan at his Western Avenue Studios art studio by a friend who suggested featuring Livan for the documentary.

Sungkriem initially balked at the idea, due to his lack of knowledge about ceramics, he said in an MCC press release. However, after seeing Livan’s work, he was inspired to go ahead with the project.

According to Sungkriem, Livan’s rarity got the better of him.

“I knew the importance of his work and the document for the next generation,” Sungkriem said in the statement. “Because of the rarity and uniqueness of his talent, I decided to work. »

MCC hosted a screening of the documentary on February 10 at the college’s Richard and Nancy Donahue Family Academic Arts Center. The event included a reception and exhibition of ceramics, as well as a Q&A session with Livan and Sungkriem.

“Yary is a national and community treasure whose passion for teaching and preserving the Cambodian art form while reinventing it exemplifies the power of art and culture to inspire and educate,” said Professor Dona Cady. of Humanities at MCC, in the release.

MCC Dean of Humanities, Matthew Olson, added in the statement that Livan is one of the last surviving practitioners of the traditional Cambodian art form.

“We are proud to have him on our teaching team, continuing this tradition with new generations and across the country,” Olson said in the statement.

Livan studied traditional Khmer ceramics and architectural ornamentation at the Royal University of Fine Arts in Phnom Penh in 1972, according to Margaret Rack, former MCC chair of art and design.

Cambodian design noted by Rack, or Khmer Kbach, is a 1000-year-old tradition of ornamentation that decorates objects and architectural surfaces across Cambodia and in the diaspora.

“It is passed down as an oral tradition with little written scholarship except for the collection of examples,” Rack said in the release. “Even in Cambodia today, students trying to learn Kback copy most of the forms without knowing the intricacies of meaning…or how to distinguish designs that are distinctly Khmer from neighboring countries. »

“It is largely the legacy of the Cambodian genocide, as there are few surviving master artists,” she added.

The project will feature descriptive definitions to “both educate and delight” to accompany Livan’s hand-drawn ink illustrations that Eiler helped format for print, Rack said.

Miller will help with distribution, which will also be offered to local schools and community groups, and sold later this year.

Middlesex students have the opportunity to learn Livan ceramics, work with hands-on projects and practice techniques. At the end of the class, Livan brings her classes to the Cambodian Kiln located in Lowell National Historical Park to complete their works.

Community Update: A Call to Bring the Power of Big Studies to Autism Behavioral Studies | Spectrum